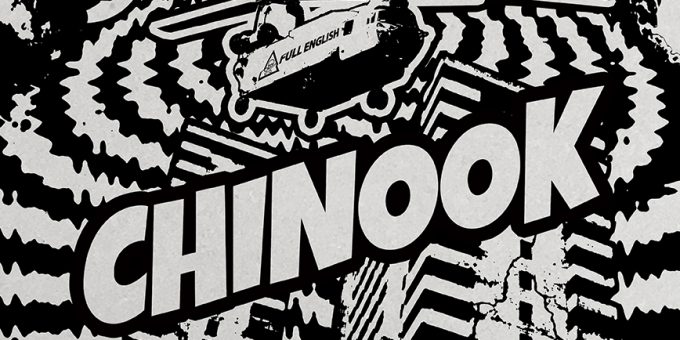 CHINOOK is the vinyl recording of Jimmy Cauty’s soundtrack to the MdZ ESTATE Tour’s most extreme experience: THE FULL ENGLISH.

Described as being suitable for those who have been desensitised by The System this soundtrack is what you will hear on entering the MdZ ESTATE Tour container when set to the Full English Mode.

It is extremely loud and disorientating with alarming instructions from the Voice of Authority, Amber Rudd, as performed by Kate Alderton.

The record is credited as being performed by Shunt Resistor and the L-13 Light Industrial Orchestra and was released in late December 2020.

As with most items published by L-13, the single – which is limited to 500 copies total – was made available in two different editions. The £15 regular edition included the record only, whereas the £45 limited edition of 113 copies included a three colour screen print of the cover, signed and numbered by Jimmy himself.

Lockdown and Full English are the two modes from which visitors can choose when entering the MdZ Container. The former only includes low level sound and some mist, whereas Full English features a three-and-a-half minute sequence of noise, wind and smoke.