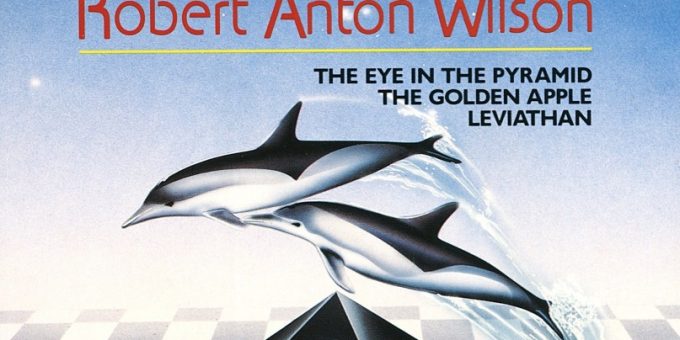 The Illuminatus! Trilogy is a series of three novels written by Robert Shea and Robert Anton Wilson first published in 1975. The trilogy is a satirical, postmodern, science fiction-influenced adventure story; a drug-, sex-, and magic-laden trek through a number of conspiracy theories, both historical and imaginary, related to the authors’ version of the Illuminati. The narrative often switches between third- and first-person perspectives in a nonlinear narrative. It is thematically dense, covering topics like counterculture, numerology, and Discordianism.

The trilogy comprises three parts which contain five books and appendices: The Eye in the Pyramid (first two books), The Golden Apple (third and part of fourth book), Leviathan (part of fourth and all of fifth book, and the appendices). The parts were first published as three separate volumes starting in September 1975. In 1984 they were published as an omnibus edition and are now more commonly reprinted in the latter form.

In 1986 the trilogy won the Prometheus Hall of Fame Award, designed to honor libertarian science fiction.

Various elements of The KLF’s mythology are references to the books of Shea and Wilson, most notably adopting the name of fictional group “The Justified Ancients Of Mummu” as their own (though spelling it “Mu Mu” instead). The many occurances of the number 23 throughout their works can also be tracked down to the Illuminatus! trilogy, while the pyramid theme also regularly appears in both.

Even though it may seem like Drummond and Cauty were heavily into the trilogy, according to Bill he only ever read the first few pages of the first book.